This week, our Sunday Salute goes to everyone teaming up for the big Hike N Howl 2007! 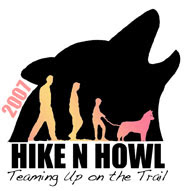 The Hike N Howl is a fund-raiser being held on the 1st of September at the Norristown Farm Park in Norristown, Pennsylvania. You may have noticed the logo over in our sidebar! It is sponsored by the Alliance of Northern Breed Rescues: Harnessed to Hope Northern Breed Rescue, MaPaw Siberian Husky Rescue, and the Delaware Valley Siberian Husky Rescue. They are pulling together (... Northern Breeds ... pulling together ... a little sled dog humor! Hee hee hee!) for this event to help support the dogs assisted by all three groups. They have scheduled a day full of fun, with the hike itself, Canine Good Citizen testing, a mushing demonstration, Northern Breed fur spinning demonstration, and much, much more! Various vendors will be there, plus fooooood booths, and prizes & raffles! They're also going to have a great parade of alumni pups from the 3 rescue groups! Won't that be special!!?!??!
We can't attend the hike, as we're about 1200 miles or so from Norristown ... but there are ways we can participate! This week, we sent our mom and dad a mind meld message about sponsoring somepuppy who is hiking! That's right! You can make a pledge/donation to one of the hikers! You can see some of these great pups at these links, with info about how to sponsor them. It was hard for us to decide who to sponsor, as so many friends of ours are hiking! Indy will be there, and Sasha, Xia will be cheering everypup on from the sidelines! ... and Echo, Shilo, Magnum, Kelsey Ann ... and MORE! How could we choose? We had Mom mail our check to the pup we've known the longest and who has a striking resemblance to our very own Dave. We really wanted to do this for our special pal - Harley is like a member of our own family, since he's Dave's "twin brother of a different mother"! Ha roo roo roo! (Hey Harley ... supersize me! Woo!) 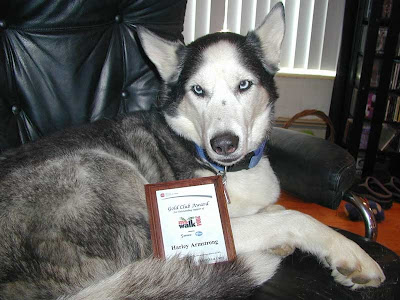 Harley with an award he received after helping his mom with an MS fund-raiser!

We are also going to grab Mom's plastic card and get a cool tee shirt with the Hike N Howl logo on it! Check them out! Aren't they great!?!? You can get one, too, and all proceeds go to the Alliance of Northern Breed Rescues!

Please follow some of the links we posted to learn more about this great fund-raiser and how you can get involved! Good luck to all three of the rescue groups and to the hikers themselves -- and for those of you within driving distance of Norristown, PA, have a wonderful time at the Hike N Howl. Oooh, hey... maybe our friends at Team Husky are going? Hey, Summer and Prince? Would you be willing to pick us up in your jet? Are we on the way from New Zealand to Pennsylvania?

To all of the great volunteers involved in the Hike N Howl - Harnessed to Hope Northern Breed Rescue, MaPaw Siberian Husky Rescue, and the Delaware Valley Siberian Husky Rescue - for raising funds and caring for pups in need, for putting on such a fun, educational event, and for ALL you do, we salute you!