Hey, everypup. It's me, Zim. I think I may have been wrong about this whole "cat" thing. Stormy and Dave just left comments under yesterday's blog about Arwen and her blog being taken over by an alleged "Commander" Bowie of the Cat Intelligence Agency (CIA). I encourage you to read what they wrote.

Stormy told me it's OK to make friends with cats - just don't ever TRUST them. For example: she had a cat friend named "Kit" back on Ft. Riley. Kit used to go on walks with Storms and Mom; they had some cool adventures together. Then after they moved here and adopted Ammy, Mom and Kit's mom set up a play date between Am and Kit's doggie-sister, Bonnie. Amber saw Kit sitting up on the porch and remembered all the cool stuff Storm had told her about Kit, so she wagged her tail and went up to greet her. Am gave her dear little sniffies - then do you know what Kit did to my sweet sister? My tiny, only probably 6-month-old, weighing in at a mere 45 pounds or so at the time little fuzz ball? She head butted her!!! My sister Amber! STORMY'S sister Amber! Can you believe it? I can't believe I forgot about that. Sure... you can make friends with 'em... just don't turn your back on 'em! 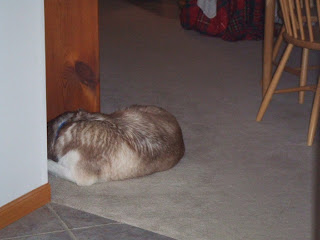 I'm going to my corner now. I can't believe I almost fell for it. Beware, puppers! Beware the cats of the C(un)IA!