A Poem by Marvin and More Cat Concerns!

Ha roo, pups! Storm here! Did you read the comments under Zim's Spies Are Everywhere post? Our dear friend Marvin wrote a VERY cool poem about ME! What a really nice thing to do! I sought and got his permission to post it here for your reading enjoyment. I give you ... A Marvin Poem....... 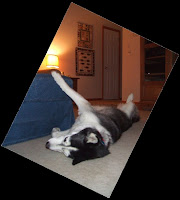 Stormy is always so security aware,
Holding up the walls & taking great care.
She guards against evil herons and cats,
Stormy is on their evil case you can be sure of that!
The AO4 House will not come to any harm,
Mainly due I'm afraid to Stormy's right *arm.

He went on to say, "...I know it is your *leg Stormy, but poetic licence etc. Plus I cannot think of a word which suitably rhymes with Leg......only "egg" and that's not much use in my work of artistic writing!"

Marvin, what an outstanding poem! I am so flattered to be featured in your prose! In my vocabulary classes at the Stormy Zoluschka Kryschtal School of Siberian Studies, we do a little rhyming. I agree that there is no word that suitably rhymes with leg! There's always keg, but maybe that would be better in a pirate-oriented poem; peg, again possible for a pirate theme... if you know what I mean; and there is beg. Beg has no relevance in a poem about a Siberian Husky, unless it involves bipeds begging the Sibe to do something... so I agree whole-heartedly with your use of the word arm instead! Again, thank rooo for the fabulous poem! I am so touched!

In other news... the neighborhood cat that had so infatuated Zim seems to have gone underground for now. We haven't seen him anywhere - actually not since Dave posted about him. I think he knows we're on to him! I hope things are going better for Arwen, Pippen, and Macie & Malechai. I'm a bit concerned that we haven't heard from M&M since the C(un)IA took over a posting. Our friends over at D'Azul Siberians had some paw-to-paw combat with an intruder cat. SGT Preston and PVT Silver suffered minor injuries and we wish them a speedy recovery. They did succeed in running off the cat! Ha rooo!
Seems the cats are going after bipeds, too, which isn't totally smart. Has anyone's biped flipped the TV channel on when "Armed and Famous" is playing? It would seem Latoya Jackson has a history of being attacked by cats! In this clip, she is confronted by her demons ...
To her credit, she sought counselling (though she could have called on the HULA Hoop for help!), confronts her fears, and was able to touch a cat by the end of the show. Here's a link to that; I opted not to post that video itself, as it is pretty poor quality. You get the idea, though. She's one biped who at least is totally aware that we should NOT trust cats!
Tail wags, everypup, and thanks again to Marvin for the lovely poem!
Stormy
PS: We are very flattered to be nominated for the Awesome Blog Award! Please check out all the blogs nominated at DWB and cast your vote! Good luck to Joe Stains, Freda and Marvin!
Posted by The Army of Four at 8:45 AM