This week’s Sunday Salute goes out to our friend Midnight, currently of Redmond, Washington! (She and her family recently moved there from California!) Midnight owns an “old” (ha roo roo roo) high school buddy of our mom – and her husband and son. She is a 4 1/2 year old Lab mix - her mom says, “the mix is the mystery, but we think she's part Pit because she has the jowls of a T-Rex”. (Sounds like she and the Jaws of Steel might be related.) Her honorary birthday is February 14; it serves as a reminder to her dad to get her mom a present for Valentine's Day. Ha roo roo roo! Funny bipeds! At least he remembers the important date – Midnight’s birthday! Her mom says that she is absolutely the sweetest creature on the planet… and we know for a fact she is also VERY hard working. Check out these pictures of Midnight dealing with her first snow! We don’t know how her dad would have shoveled without her! What a tremendous help! Hey Dave, is the Labrador a Working Breed? 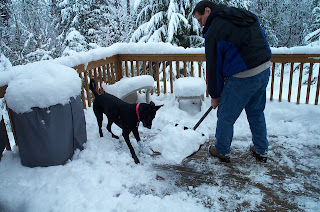 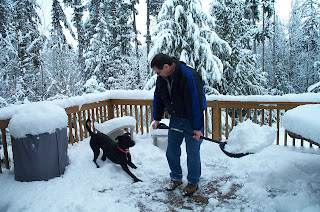 Fling it, Dad! Fling it! 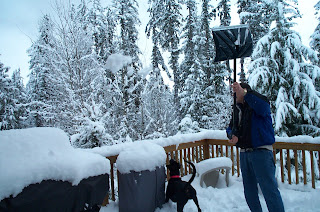 YEAH!
Midnight’s got a great adoption story! She came from the animal shelter in Camarillo, California – 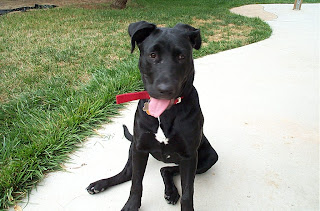 just north of Los Angeles. Mom's friend told us, “We went there in the summer of 2001 looking for a puppy. They had two, they told us, but puppies are very popular, so they would be holding a lottery. While we were waiting for the lottery to begin, my son began chatting up a woman who was waiting as well. He told her how much he wanted a puppy but how his mom would only let him have a girl …. ANYWAY... when the lottery occurred, she won. We came in second. But they had two puppies--siblings. A boy and a girl. So the woman Paul had chatted up said, ‘Well, I'll take the male since this nice boy really wants the female.’ That's how we got Midnight!” Wow! Great work, Paul! And that lady was sure nice to let Midnight get to the right home!

We noticed Midnight has a baggie on her foot in the pictures and asked about it. She had a big growth on her paw; the vet said it was not malignant, but it just kept growing! He said if Midnight had it taken care of now, it would heal better – so her mom had the vet remove the growth. Poor baby!!!! She's wearing a bandage now, so whenever she goes outside, it must be wrapped. Her mom said they finally resorted to plastic trash bags to keep everything dry, because nothing else worked. Midnight doesn't care at all (what a good girl; we know what fate would await something like that around here!!!). Her sutures were scheduled to come out Saturday. 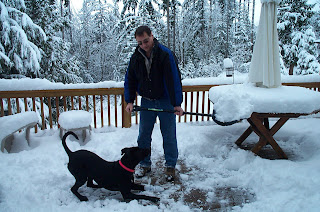 In the picture above, you can see the baggie isn't slowing Midnight down one single bit!

This special girl can do "give me five," "dance," "roll over," and "say I love you." COOL! And "gimmee kisses." She has a CAT, and is gentle with “Digger”. Her mom says her only bad habit is smelling Digger's fanny and told us cats REALLY don't like that. She also helps herself to the occasional snack out of the litter box (kitty tootsie rolls). Over all, Digger and Midnight get along fine. Their mom told us, “The cat is a hoot. She just kind of rolls her eyes and mutters under her breath, 'dogs!'” Um… Midnight? You might want to go through our archives and check out the posts about the C(un)IA and how you can’t really trust these guys!

We loved seeing Midnight’s snow pictures – though we’re expecting snow today, we’ve had mostly sleet with a dusting over top of that. Judging from Midnight’s pictures, Redmond, WA, looks like a mighty fine place right about now – the Bureau of Tourism should thank you for your advertising job! And we hope your dad appreciated your help shoveling!