Woo, Dave here! I thought I better handle this post 'cuz Ammy kind of upset and scared for Hamish ... and is worried that Zim's falling into the same trap ... and well, I'm getting ahead of myself. Let me back up.

Did you read the comment our very good friend Pippin left on our blog yesterday? She said that Hamish has "broken her heart by signing an allegiance with the evil kitty at their house." Oh, no! So we checked Pippin's blog - and there is a big problem all right - in the guise of a kitty named Fox! He's using the ol' "divide and conquor" treachery on the pack!

See... it's not just you guys! I read the comment Zim left on Pippin's blog a couple weeks ago. In part, he said, 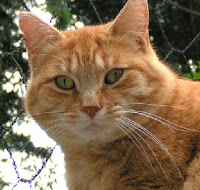 forced road march this morning! He peered out of some honeysuckle vines at us, then came right up to us! Storm was delighted - she likes cats! - but Dave almost pulled mom right on her face! [woo!] Me and Am were with dad, and the cat probably got to within a foot of me! I didn't know what to do! Do you think he was a spy, trying to infiltrate the Ao4? Mom and dad trotted us home. I looked over my shoulder for him the whole way home - about a mile - and apparently tried something called "dad's patience" the whole way home. I sat at the kitchen window and looked for it for a couple hours. No sign of him. Yet." 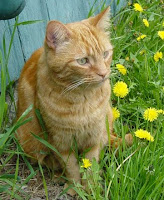 Well... Zim is STILL trying to make FRIENDS with this cat! But he's GOT to be a SPY! Who else would walk right up to FOUR Siberian Huskies like "Hey, how ya doin'?"??? Zim looks for him every time we're down by that corner! Sure, he says he's checking for spies, but you didn't see the look on Zimmie's face! He was sucked in by the evil cat! Just like Fox is doing to Hamish!!!


The cat we've seen looks like the cats pictured in the mug shots at right. We've seen him a handful of times now. Seems like he hangs out down on the corner, waiting for us. Has anypup seen this cat? He's clearly a SPY trying to infiltrate the Army of Four. I, for one, will not stand for this! Neither will Amber! Stormy won't let us hurt him, but she's certainly not under his mind-control like Zim seems to be!


Beware of cats, fellow pups! They seem to be on some sort of infiltration mission lately. Keep your eyes open! And understand how sneaky and subversive they are!!! Hamish, I hope you can come back to your senses. And the rest of your pack, too. Pippin is the only sane one!


PS: This is for Hollybollyboo. I didn't want to make a post and not have a picture of ME! Woo. This is me from a couple years ago, playing with a rope toy. We don't get to chew on those any more, 'cuz "The Jaws of Steel" would get huge hunks off and swallow them and Mom was afraid of intestinal problems... so we don't get to chew them any more. Oh well. Here I am, though. 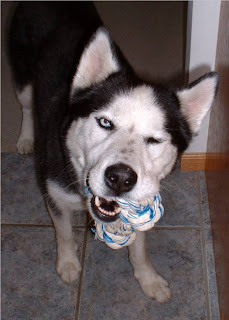