Woo! Dave here, with some more of our "parts". Today, it's our paws. Mine and Zim's in particular. Here is one of mine: 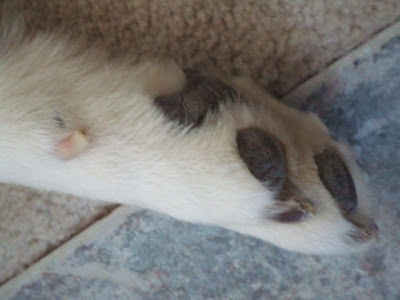 And here are Zim's. 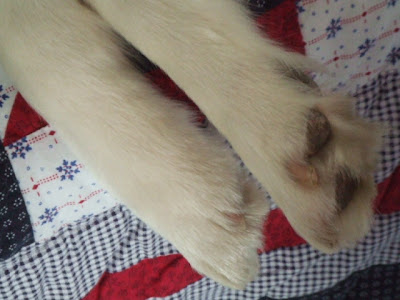 Note I have a dew claw and he doesn't. Some breeders remove them as soon as the puppies are born - sometimes it's done to present a cleaner look in the show ring and sometimes it's done so the pup doesn't catch his dew claw on a bootie - like if he's running the Iditarod or something!

We have no idea why Zim's were removed. Both of the girls and I have them, front ones, and they're the only nails we ever have to get trimmed. We do a lot of walking on sidewalks, so the concrete acts as a giant emery board, filing our nails down. Pretty cool. I don't mind having my dews trimmed, nor does Stormy. Amber isn't thrilled by it, but she figures it's quicker than a brushing! Woo.

You can't tell in those pix above, but my paws are lots bigger than Zim's. Remember the shot of us together in the "The Boys of Summer" photo the other day? You can tell there how much taller I am. Anywoo... here are our paws together:

That's Zim's on the left, mine on the right. Zim is "breed standard", I am from Texas. Woo.

Have a great day, everypup!
Luv,
Dave
Posted by The Army of Four at 7:55 AM