A Favorite Joke from M. Beublet

Hello, everypuppy! It's me, Amber today! In light of Zim's post from yesterday, I thought I'd tell you a funny joke. I think Marvin might really like this, because he seems to like a good pun. And Tin Tin is just so funny! I think he'll like it! Well, I hope ALL of you do! It's one that a Belgian friend of Mom and Dad's used to tell them - back when they lived in Belgium. I didn't get it at first, but then after studying French a little more at the Stormy Zoluschka Kryschtal School of Siberian Studies ... I got it. Without further ado - here is Monsieur Beublet's joke:

A rabbit challenged a snail to a race. He figured he was a shoe-in to win, as snails are notoriously slow. The snail agreed, but said, "Let's make our own cars and race those!" The rabbit agreed, figuring he could have his car built, painted real cool and waiting at the start line before the snail could even start work on his! The two of them got to work, and the rabbit indeed got his done first. His car was red and had a huge "R" painted on it! Just when it looked like the snail was finished, he started some fancy paint work on his. "Hurry up, Snail! You don't need that!" But the snail took his time and painted a big "S" on his vehicle. He finally got it to the start line, the signal was given, and the cars took off! Surprising everyone, the snail shifted his car into gear and TOOK OFF with a huge lead! ZOOM! He pulled way ahead of the rabbit! The crowd went wild ... and do you know what one spectator said? "Look at that 'S' car go!"

Hee hee hee! Get it? ... "Look at that 'S' car go!" Here is a shot of me and Davy the first time I told him the joke. You can tell he thinks it's funny. I also told it to Monsieur Zim. 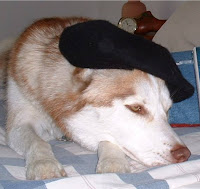 Sometimes I think Zim takes his studies too hard.

Have a happy Saturday, everypuppy!