Hey pups! It's Stormy - and today is the 10th anniversary of my adoption! Yeah - my Storm-aversary, my Gotcha Day, my Homecoming! It's ... Adopt-A-Stormy Day!

Today seems like the perfect time to tell you how I got here! By late 1996, I had been on the road a long, long time. I won't tell anyone where I came from, but I was picked up by the local Animal Control people and landed in the slammer. (The same one Zim and Dave did stints in, but at a different time.) I had been on the road so long, my paws were bloody. That's a lot of time and a lot of miles. Yes, that means I'm a Roads Scholar. (Ha roo roo roo to those of you who get the pun!) I was adopted from there by a couple who had a rather unfriendly, large, powerful dog who did not care for me. Neither one of us got any exercise ... and that's just torture for pups - especially large ones and especially Siberian Huskies! That made a bad situation worse.

By March (1997), the people gave up on me and tried to return me to the shelter. They couldn't take "returns" and would have had to euthanize me! They pleaded with the people (God bless them!) to please just try placing an ad in the local paper - just one ad! Please?!? Fortunately for me, they agreed - and even more fortunately for me, my dad just happened to be perusing the paper that fateful morning!

Mom made the call - the only one those people got! - and she and Dad drove out to get me. They came into the house and the man there held my collar tight, like I was an attack dog or something. I wriggled free and threw myself at who I knew would be my new dad. "Let's get out of here!" I gave my future mom my best "Harp Seal Look" even though I was fairly sure I'd won her over already. They told the people they wanted me (me! someone wanted ME!) and we were on our way. The lady followed us out of the house and my new mom asked if I would like to go potty before we headed home. The other lady said, "Oh, I just had her out." Yeah, right. I shot her a look, then went potty for a long, long potty time. We got in the car and never looked back!

On the way home, we talked about a name. The other people had called me "Storm". My new parents were going to change my name, mostly so I'd get a fresh start, but as we drove onto Fort Riley, the military installation where we lived, a Kansas storm was blowing in. A detail of soldiers was lowering the American flag at post headquarters and was putting up a "storm" flag -- a smaller, tougher version. Ha ROO! Mom and Dad took it as a sign that the name fit, but softened it a bit by mostly calling me Stormy! Now I go by either one - or Storms. I was about one and a half years old when I came home.

Zim thought I should post a bunch of pictures of myself today; I've chosen ones of me with the rest of the Ao4! (Well... except for that first "artsy" one!)
Here is a shot of me and Amber from the other day! We had just been outside and were waiting for a cookie. 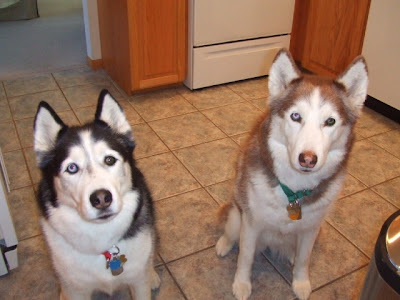 You've all heard Zim talk about the lessons I teach him at the Stormy Zoluschka Kryschtal School of Siberian Studies. Being a Roads Scholar, it's important that I instruct others! What you may not know, is that I also like to tell jokes on occasion. Here is a picture of Zim and me, after I told him a joke! 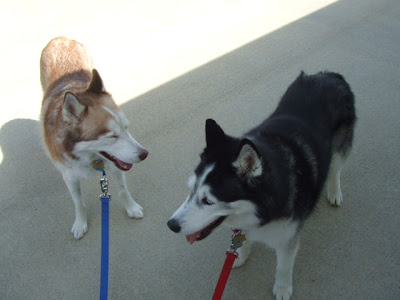 He obviously found it remarkably funny.

Lastly, here's a picture of me trying to snuggle up to Dad's feet. Dave just happens to be in the picture, too. Oh, ha roo roo roo, I'm just kidding. Dave isn't one of my puppies, but I do like to hang out with him. 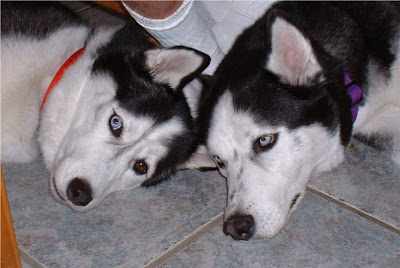 We have a fun day planned - walkies, treats, and play time! Anyone is welcome to come over to help celebrate my special day!