Our Sunday Salute this week goes out to our friend Nikki of South Africa! You may remember having read about her before - she's gone on some really cool hunting expeditions (uh... we mean "walkies") and is an excellent excavator! This past week, we got an email from her (complete with photos!) about a recent trick her Mom and Dad played on her! We thought we should share the horror of it all with you dear readers, in case your bipeds try the same scam on you! Warning - Amber says these pix are VERY scary! (Dave thinks they look relaxing ... but we all know about Dave and his rather odd tendencies.)

Here's Nikki's email; we've cut in the pictures, to illustrate her tale (and tail) and have added our comments:

Dear Everysibe!!! What a morning!! My humes decided that today was bath day!! (Editor's note: Did you hear that gasp? It was Amber!) What is wrong with them??? I think I was “nice to be near” and certainly did not need a bath. Anyway there was no getting out of it, they tricked me into putting on my harness by letting me think we were going to have another walkie!! (What a cruel hoax!) 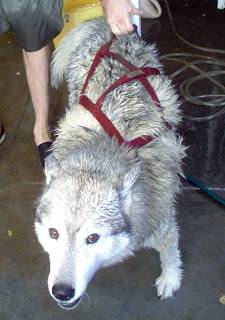 Once they got my harness on I was in for it.

Water, gallons of it, was poured all over me!! What could a pup do???? I just had to stand there and put up with it, (although here she is, trying to make a get-away! Go, Nikki, GO!) 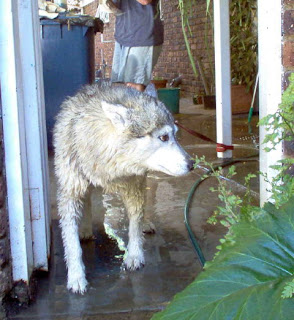 then some really smelly stuff was poured over me, they said it would make me smell nice. I want to know what was wrong with my smell to start with?? (We bet you smelled GREAT before! Bipeds have a really odd opinion about what does and doesn't smell wonderful!) 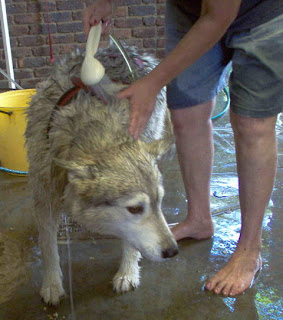 More water, lots of rubbing – oh the indignity of it all! 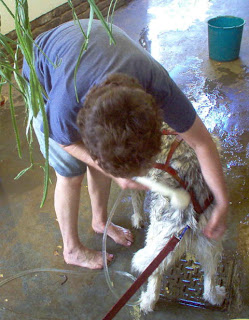 Then more smelly stuff, this time a blue colour and I was told that this is what was used on my brother Max when he was going to shows! The blue is supposed to make me “whiter than white”!! More water, I really thought I was going to drown . . . . . and then da da . . . . FREEDOM!!! (Finally!)

I wanted to go and dry myself on my humes bed (that’ll teach them!!) (Ha roo roo roo! Been there, done that!) but I was locked outside – me, Nikita Porter, locked outside!!!! I had to try and find a nice patch of earth so as I could at least regain some of my “character”. 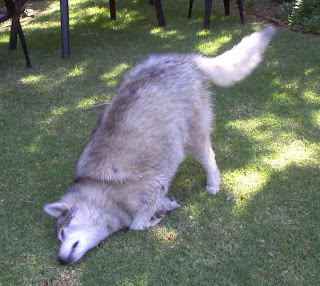 Ahhh! Bliss!
Phew, it is all over now and I am told that I am now the most beautiful girl in the whole world and the best smelling too!!! (We thought you looked great BEFORE!) I am also told that I had to have a bath as I am going on holiday in two weeks time and I have to be nice and clean for that!!! 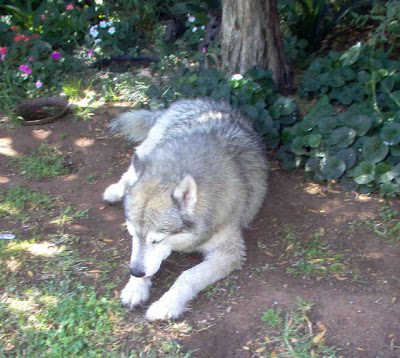 If this is what happens when you go on holiday, I think I will stay at home – thank you very much!!!!!

Woo’s and love from a clean (what’s that?) and very pretty Nikki

Wow, Nikki, what an ordeal! Amber had to put her paw over her eyes several times; she was just horrified by what you had to go through. Except for somepuppy, the rest of us are a bit uneasy, too, as Mom seems to think that now that our weather is warming up, we're going to meet the same fate mighty soon. It's time for us to get our Weather Control Device fired back up and set it for "Siberia Weather"!

Nikki, way to try to fight your way out of the bath! And way to roll in the grass and dirt afterwards! (We can't believe you were locked out of the bedroom!) For all of these things, we salute you!