This week's Sunday Salute goes out to our dear friend K of Mexico City, Mexico! We've known K for a few years now and were SO pleased to see him featured as Dogster's Dog of the Day last week! How cool is that? Congratulations to K! We thought there was no time like NOW to put him in our Sunday Salute spotlight!

You may remember K from a post Amber made in December of '06. Like us, K is a Master at doing cute poses. Dave has even written a Haik-woo about him! Here it is, Haik-woo 23: 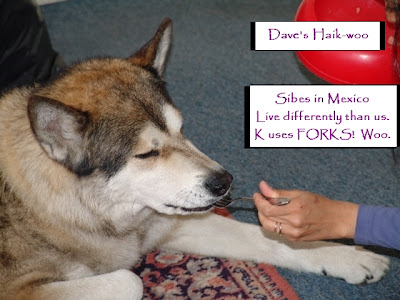 But he hasn't always lead that kind of life ...

K lives in Mexico City. His parents found found him roaming the streets of the city - no tags, no microchip, and despite putting up posters and signs about him, no one claimed him. His mama said she thinks he had "been living rough for a long time because he was very skinny, had scabs all over him and had bits of his face fur missing." Being the wonderful biped she is (and the wonderful biped his dad is!) they gave him lots of loving and good food and care - and in a few weeks he was like a new pup! Ha rooo! 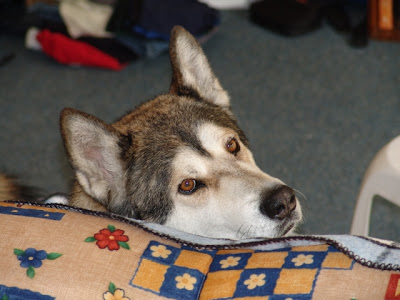 Look into my sweet eyes. May I have some steak, please?

We have heard incredible things about K's life in his fur-ever home - eating spaghetti bolognese, going on lovely walkies with his mama and Kali, doing cute poses - it's hard to picture him roaming the streets! We asked him about his past and he really works hard to forget that old life. He said, "I don't know anything about my past. All I've been told is that I was adopted mid-December 1999, which means I've been with my family for 7 years." He went on to say he was a "tornado". He told us, "Walkies was purgatory for mummy and daddy because all I did was pull, pull, pull; I just wanted to get there, wherever 'there' was." He added, "All I know is that since 1999 I've been loved, loved, loved."

Amber says that K is one of the kindest Siber-boys she knows; he always has something supportive or nice to say! She asked him if he is still a tornado on walkies today, and he said only if he sees a cat. Ha roo roo roo! We can relate, K!

K is estimated to be about 9 years old. In November of '05, he and his parents rescued his (now) 8 year old Siber-sister Kali. It took K, Kali, and their parents hard work, patience and understanding to make the dynamic work, but these two formerly abused pups do great together today! K even said he'd share any extra treats he got for being the Dog of the Day with Kali! Only for the day ... but that's mighty nice of him!

K's mom is so proud of him - Dog of the Day and now honored with our Sunday Salute? We think steak is in order, if we do say so ourselves! Often! (Let us know if that works, K!)

Congratulations of your Dog of the Day selection, K! And more importantly, for all you've overcome in life and the sweet, caring, Master of cute poses you've become -- we salute you!