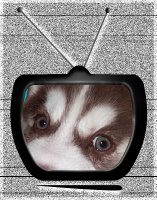 Tail wags, pupperdupperdoos, it's me - Storms.

We've been reading on some of our favorite blogs that there is nothing worth watching on TV. Quite true, though Zim likes to watch some things. Cut him some slack - he was chained to a tree with nothing to do and no interaction for a year and a half before I adopted him.

I did come up with the idea to the right though -- Tubey TV. That could be worthwhile programming - all Turbo, all the time! Ha ROO!

That leads me to the business du jour. Dave and I took mom up to where the Giant lives yesterday. We wanted to have a quick look, see if we could see anything new, see the Giant or maybe see his huge dog. Here's what we did find. And it's not good news. 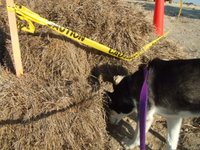 This first picture is Dave rediscovering the Giant's shredded wheat. You may recall that Zim was going to try to nab some of them and send them to Tubey. Dave was trying to figure out how to haul some home so Zim could give it to the UPS man to take to Tubes. "Hey Storms!" Dave said. "What's this yellow stuff?"

I took a closer look. "Keep an eye out for the Giant while I read it, Davy!" 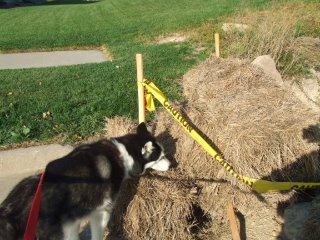 I went in for a closer look. It read "caution" ... which doesn't read well for us sending shredded wheats to Tubey. I think the Giant may be on to us! Why else would he mark his stuff with caution tape???

Be assured we'll keep on our toes. We'll keep you updated with any breaking news.

PS: Tubey, Zim is sorry we won't be able to send you any Giant shredded wheat, but hopes you'll understand. Maybe the cool Tubey TV picture will help ease your disappointment?