Wooo! It's me, Dave.
I've been really moved by the poems my friend Marvin writes. He even wrote a poem about me and my Haik-woo! Can you believe it!?! I feel very touched! You can check his poem out here.

One of his readers asked what Haik-woo is! Basically, it's my own version, the Siberian version, of the Japanese form of poetry called haiku. Three lines of non-rhyming verse, 17 total syllables: 5 in the first line, 7 in the second, and 5 in the last. That's haiku. And it's intense in its brevity! (Stormy taught me that word.) In Haik-woo, it's the same thing - except the last word is always "woo". That's my favorite thing to say, so I finish every poem with it. And it makes it even more challenging to say what you need to say in a limited "space". 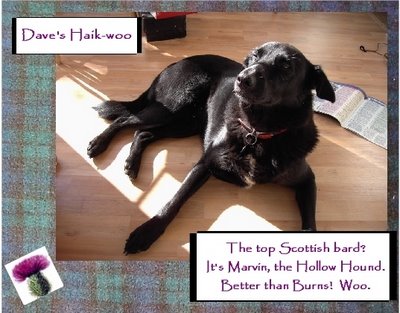 Dave ... With totally no disrespect to Robert Burns.