Hi everypuppy! It's me - Amber! We had related questions from our dear and lovely friends Sitka and Holly. Sitka wanted to know, "Juarez, with D'Azul Siberians, posted a picture of his snow nose (which is super cute). My question is, 'Why do some Siberians' noses change in winter months, and others' don’t?' Furthermore, I live where it is hot, although I like to think that I have a snow nose year round (with the pink stripe down the center). So, can you all enlighten me and everyone else???" And then Hollybollyboo asked, "I have another question for you smart Sibes!!! D'Azul is posting pictures of their noses. Samuel gets snow nose in the winter, but it goes away in summer, so his nose then looks like mine - all black. I was wondering if Sibes in the south get snow nose, even though they don't get snow? I wish I got snow nose. It's really cool!!" These were such good questions! Stormy gave the assignment to me - and I had to give the issue a lot of thought. 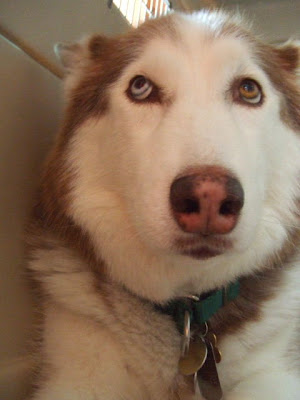 Before I get started, let me say that I totally agree with Sitka - Juarez has a VERY cute nose! Very cute! :)

I did a lot of research on this. For readers who may not be familiar with the term "snow nose" - please look at my nose in the picture above. See the pink stripe down the center? That's a snow nose, and it's fairly common in Siberians. All four of us get varying degrees of snow noses during the winter. Check out Stormy's! 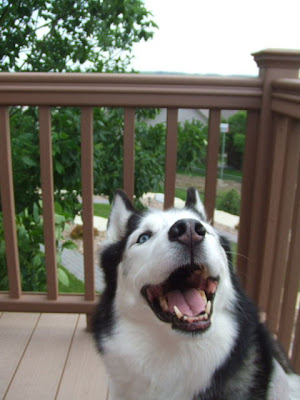 Check out my nose!

Mom just took that picture last week. She doesn't get the degree of snow nose I do, but it does pinken. In the summer, it turns back into a lovely black gumdrop of a nose! This is very normal and if we were show-puppies like some of our friends at D'Azul, it would not be considered a fault in the show ring.

Like Stormy, Davy gets a modest snow nose. In the picture Dave posted a while ago where he was doing his im-Siberian-ation of Holly's brother Samuel, he pretty much had his full amount of snow nose going. Here is a picture of him from the other day: 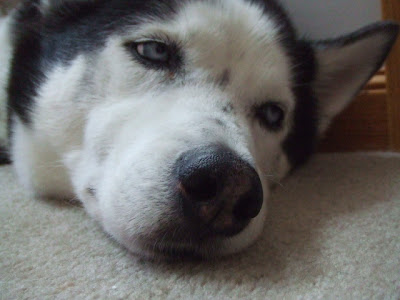 I've got a pickle nose ... and a snow nose ... turning back into a black gumdrop nose! Woo.

His black nose color is coming back in, too. The snow nose is thought to be caused by the shorter daylight hours in winter and hence less UV rays. The return to a summer full of sun darkens most snow noses back up. So Sitka, even though you don't get much cold weather where you live, the shortening of the daylight hours in winter would effect your nose! You have a bee-roo-tiful snow nose, as we can see in the Haik-woo you wrote in Ask the Ao4 I. And Holly, that answers your question about Southern Sibes! 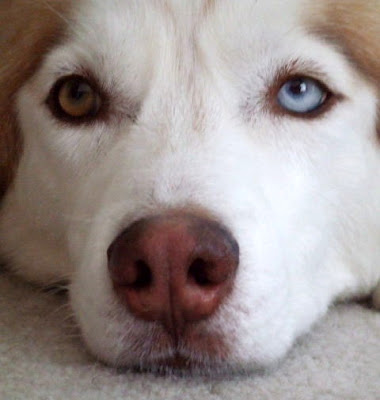 Zimmie's snow nose is cute, isn't it? Anyroo, I hope that clears things up about snow noses.

Dave is going to field Jazz & Dixie's question about making baths more enjoyable (???) tomorrow. He did a lot of research yesterday, taking photos as he went. Yes, that means Dave had a bath. Guess who else got one? 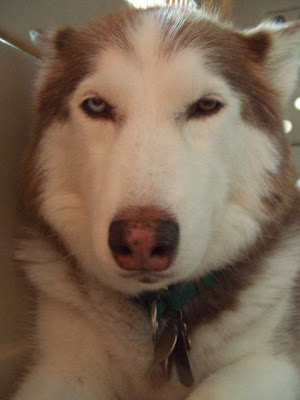 That aside, thank roo for the wonderful questions! Keep 'em coming!