We'd like to wish all of our readers here in the US a very happy Independence Day! On the Fourth of July, we celebrate the birthday of the United States as a free and independent nation.

In his weekly radio address President Bush said, "On the Fourth of July we celebrate the courage and convictions of America's founders. We remember the spirit of liberty that led men from 13 different colonies to gather in Philadelphia and pen the Declaration of Independence. In that revolutionary document, they proclaimed our independence based on the belief that freedom was God's gift to all mankind. To defend that freedom, the 56 signers of the Declaration pledged
their lives, their fortunes and their sacred honor. Their sacrifices built a new Nation and created a future of freedom for millions yet to be born."

We celebrate their bravery, conviction, and sacrifice today! We have the privilege to live in the "Land of the Free" because of the brave! 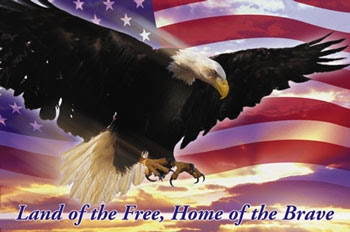 We'd also like to wish Aleeya, the mom of Prince and Summer, our Team Husky friends in New Zealand, a very happy birthday! We'll have some cake in your honor ... and yes, we'll try to send some to our buddy Echo!

Have a happy Fourth! And stay safe, everypup!